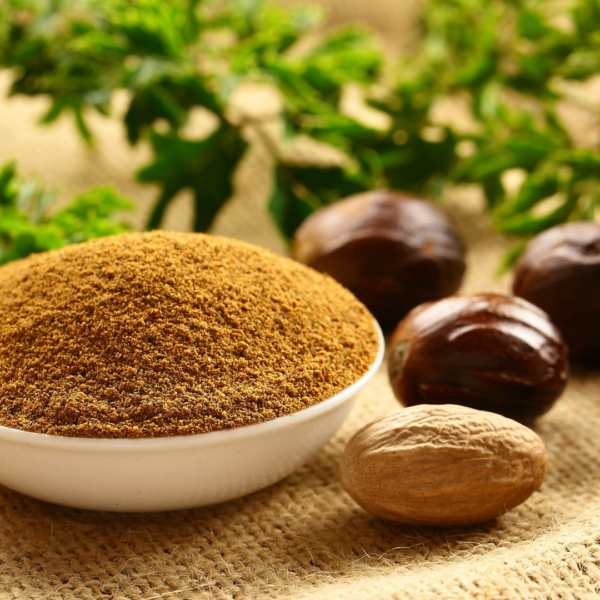 Nutmeg is the ground spice of several species of the genus Myristica. Myristica fragrans (nutmeg) is a dark-leaved evergreen tree cultivated for two spices derived from its fruit: nutmeg, from its seed, and mace, from the seed covering. Nutmeg is the spice made by grinding the seed of the fragrant nutmeg tree into powder. The spice has a distinctive pungent smell and a warm slightly sweet taste. It is used to flavour several types of baked goods, puddings, confections, meats, potatoes, sausages, sauces, vegetables, and drinks such as eggnog.

Nutmeg is used for flavouring many dishes. In Indonesian culture, it is often used to flavour spicy soups such as oxtail soup and rib soup. t is also used in gravy for meat dishes, such as semur (beef stew), ribs with tomato, and European derived dishes such as bistik (beef steak), rolade (minced meat roll) and bistik lidah (beef tongue steak). It is favoured in some indian dishes, such as garam masala. In traditional European cuisine, nutmeg and mace are used especially in potato dishes and in processed meat products; they are also used in soups, sauces, and baked goods. It is also commonly used in rice pudding. In the Caribbean, nutmeg is most commonly used in beverages. It is typically sprinkled on top of the drink, such as the Bushwacker, Painkiller, and Barbados rum punch.

Browse our other Caribbean products here.